They’ve had a fractious relationship over the last few years, but it seems as though tensions has thawed between Katie Price and Peter Andre.

Katie, 41, sent her love to Peter Andre, 47, and the family after he shared a clip on Instagram of his Good Morning Britain appearance earlier that day.

He had appeared on the show to talk about homeschooling his four children, two of whom he shares with Katie; Junior, 14, and Princess, 12. 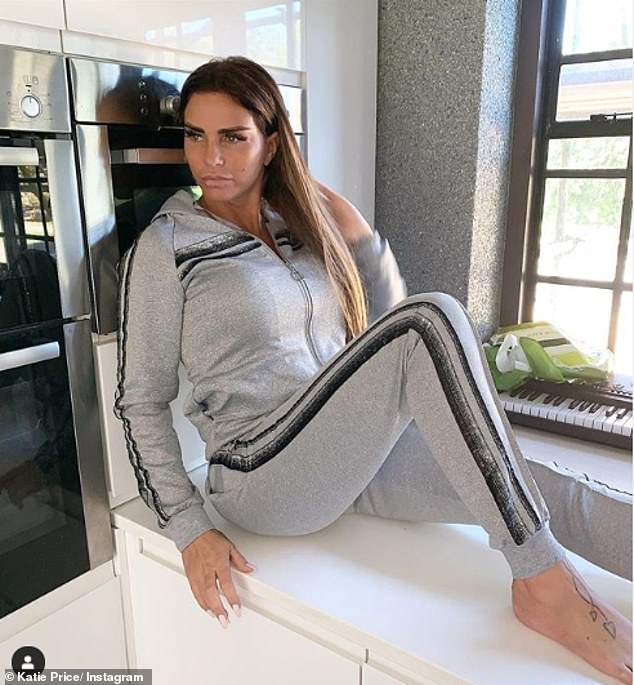 ‘Stay safe all of you’: Katie Price sent her love to ex Peter Andre and family after he revealed he was homeschooling their children during coronavirus lockdown

Katie, who has been keeping a low profile of late, wrote: ‘Stay safe all of you,’ alongside a heart emoji.

Peter had earlier expressed his worries over his children contracting the coronavirus, especially since his doctor wife, Emily, is working on the NHs frontline.

It’s refreshing to see Katie and Peter getting along so well as back in December, they were at loggerheads. 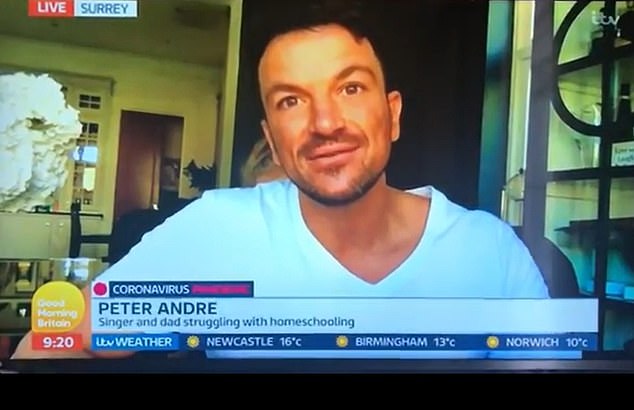 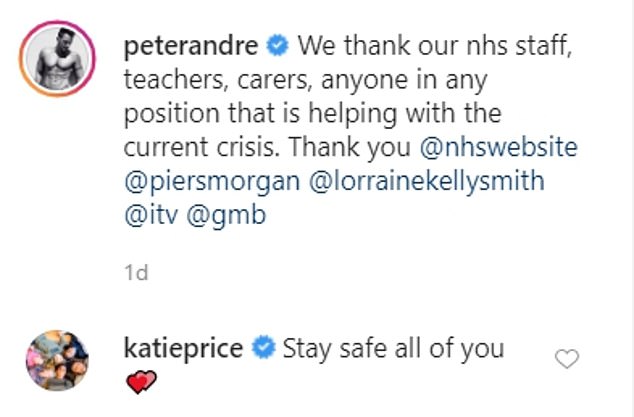 Nice: Katie had taken to the comments section to share a sweet message after Peter had appeared on GMB earlier to discuss homeschooling their children during the lockdown

The former glamour model had threatened to release a tell-all video detailing the secrets behind their marriage, saying she had ‘nothing to lose.’

Katie was recently declared bankrupt after facing further legal action over her spiralling debts, when she was pursued by creditors and the taxman after revealing she has spent her entire £45million fortune.

Sources have claimed that Katie no longer cares about being sued by Peter or any of her other past loves because she doesn’t have any money left to give them.

In a radio interview she teased: ‘It will be explosive. They’re going to be named and shamed, I’m going to put people in their place- the Pricey is back and she is on fire.’ 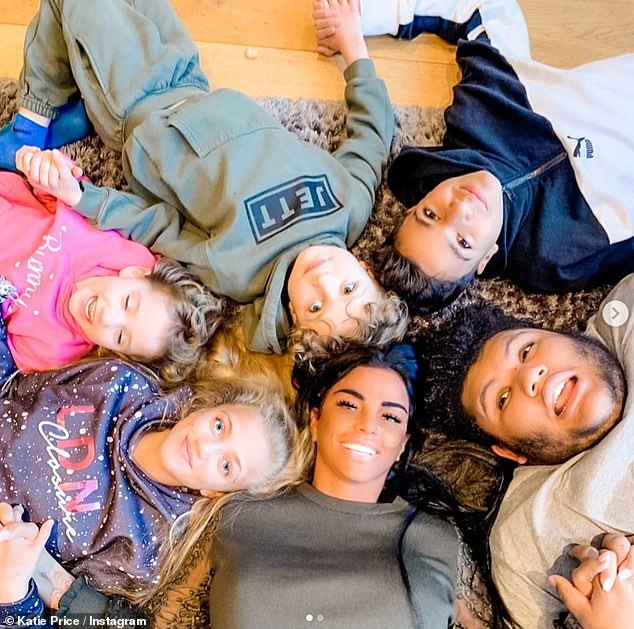 Time out: Katie recently returned from a social media break and deleted all her content in place of this sweet snap

Meanwhile, on Wednesday, Junior revealed that he is showing symptoms of the coronavirus.

He took to Instagram Stories on Wednesday and said that while he has not been diagnosed, he was making sure he was staying safe.

His words come just hours after Peter appeared on GMB to say he and the children were staying in separate rooms to his doctor wife, Emily, as she is working on the NHS frontline. 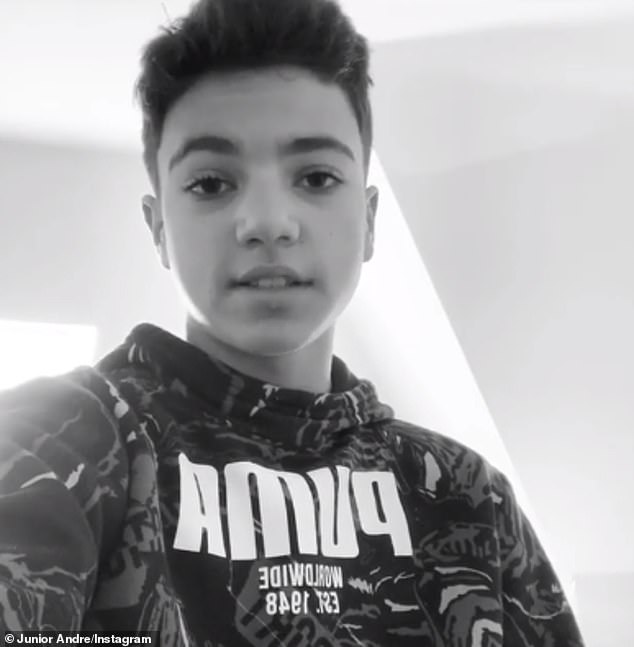 Stay safe: On Wednesday, Katie and Peter’s son Junior, 14, revealed o he is showing symptoms of coronavirus, hours after his father said he was ‘scared’ of his children contracting it

‘Everyone please stay safe these aren’t easy times like I said.’

Junior is currently at home Peter, 47, sister Princess, 12, as well Amelia, six and Theo, three, from Peter’s marriage to Emily, 30. 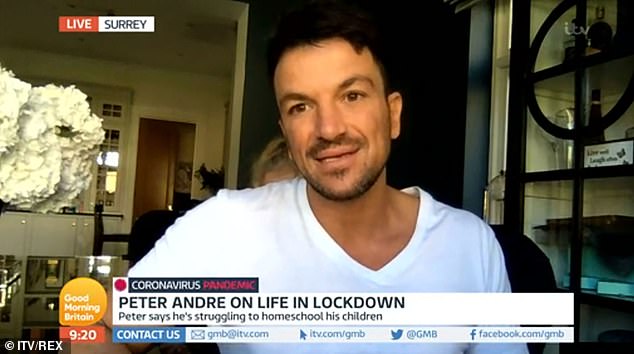 Honest: Hours earlier, Peter told GMB that he and his doctor wife Emily have been staying in separate rooms to protect their children from the virus as she works on the NHS frontline

Peter has been home-schooling the children while Emily works and said she was taking every precaution to make sure she didn’t bring the virus home.

GMB host had asked Piers if he was proud of Emily yet fearful for her while she is at work.

Pete replied: ‘Yeah, I am… Emily, along with all the NHS staff and carers are now exposed to something… when they come home, their exposure means that we’ve got to be careful, they’ve got to be careful, obviously, so we have to have some sort of distance, because we don’t want the kids to catch it, so it’s a little bit difficult times. 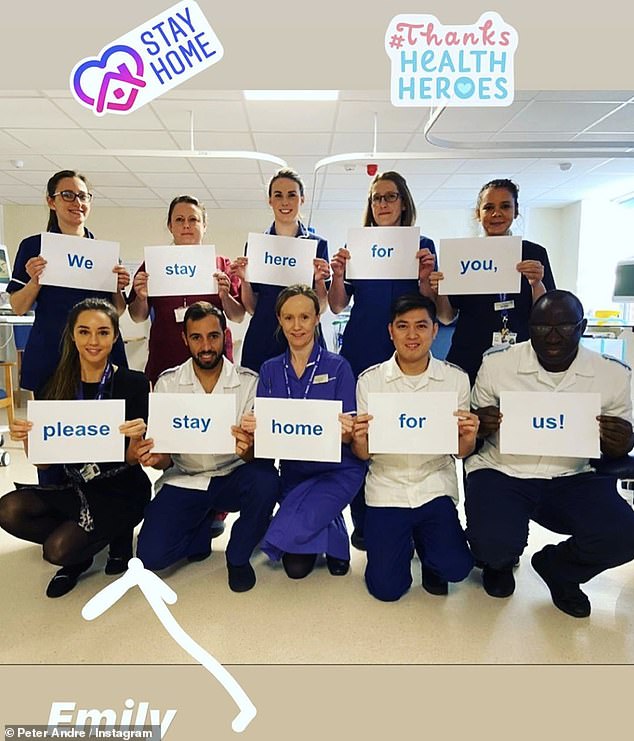 Please! The former pop star previously shared a photograph of his wife and her medical workmates holding up signs urging people to stay at home

‘But she’s my absolute hero for doing this, so many people are just stepping up to the plate. This is a really serious issue and I’ve agreed with you all along when you’re telling people, ‘Listen to what’s going on. This isn’t a joke, this is serious.’

Piers then asked Pete if Emily is worried about a lack of protective gear available at work and Pete, said: ‘Yeah, honestly I do feel that. Maybe they just weren’t prepared for this… it’s obvious because you can see the protective gear they’re wearing is just a paper mask which is not going to be that protective.’

He added: ‘She obviously tells me a lot of stuff because of confidentiality, but because she’s exposed to the virus quite a lot at the moment in the last few days, it means now at home .. we’re having to… it’s weird to say, but we’re having to be in separate rooms and the reason for that is because I’m the one who has to have the kids now and so if I’m exposed to it as well… I’m just scared the kids are going to get it.’ 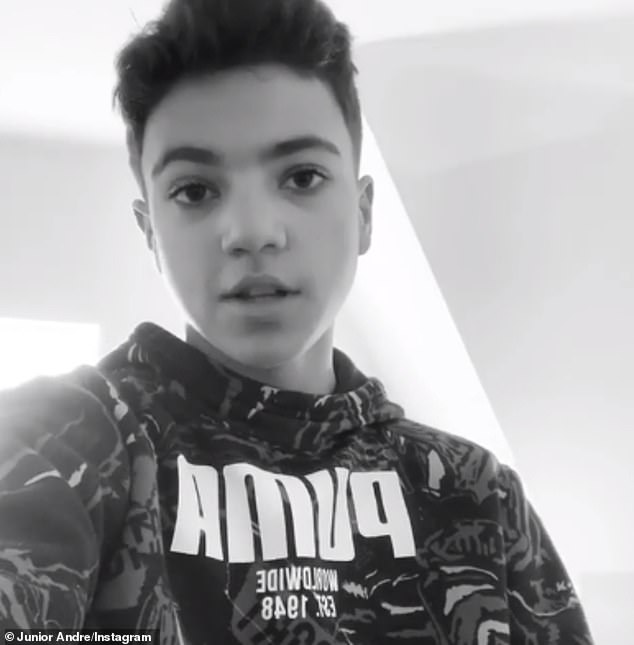 Looking after himself: Junior was keen to stress that he hasn’t had a diagnosis at this point

Lorraine Kelly asked Peter how it was all going and he said: ‘My appreciation for teachers has gone way, way high.’

He added: ‘It’s nothing compared to what Emily’s doing and NHS staff and carers up and down the country. What I’m doing is absolutely nothing to that, but it’s got its own challenges because I’m not used to it.

‘I’m used to having the kids around, but I’m not used to the homework side of it. The kids are starting to realise that I’m not as smart as I thought I was!’

Lorraine then asked Peter if he’s got a structure or routine and he responded: ‘Yes, but as most guys would know, we don’t do well structure, it ends up being destructure, destructing! It’s all a bit of a mess.

‘Yesterday, for example, I tried to make bread in between their homework and us doing things, and I mean the thing nearly exploded.’ 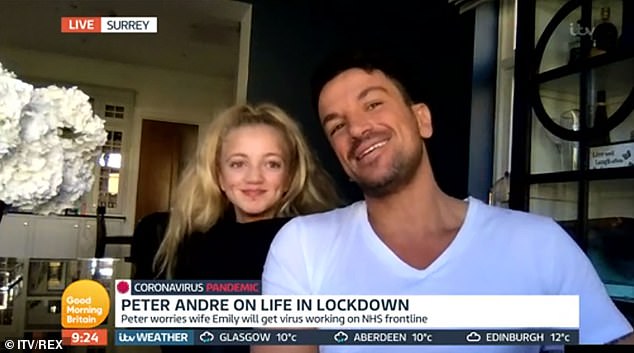 Doing his best: Peter was joined by his daughter Princess, 12 earlier, as he spoke about the difficulties of homeschooling his four children

Piers Morgan then said he’s been looking after his daughter for a bit and added that ‘The Dads have been getting away with murder for years’. 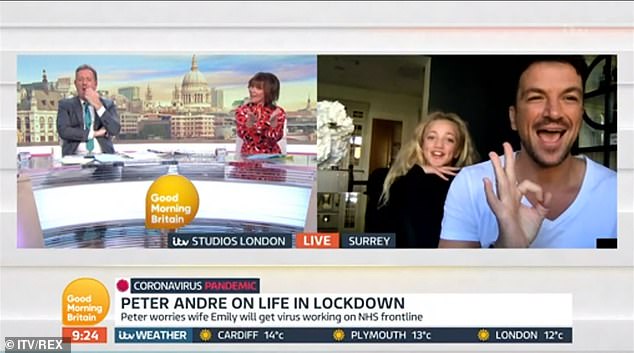 Sharing is caring: Piers Morgan joked that dads have been getting away with murder for years as they helped out more with the kids and Pete agreed 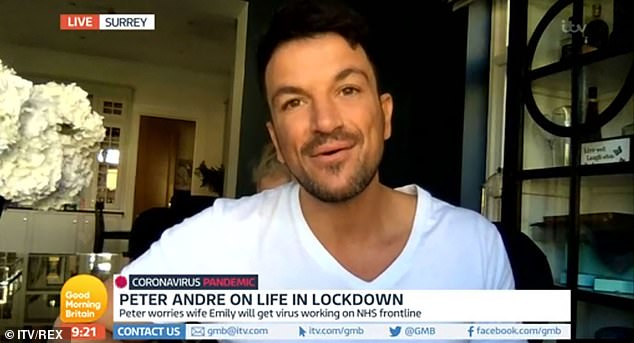 Proud: Peter called his wife his ‘absolute hero’ for doing what she does and saving others

Pete said: ‘That’s exactly right, Piers. We’ve been getting away with murder for years, I’ve realised that now.’

Pete’s daughter, Princess, then popped into the video and Lorraine asked if he’s doing a good job and she said: ‘No! He’s not smart!’

Piers asked Princess what her dad’s cooking is like and she said: ‘His cooking’s the best!’ Pete added: ‘I’ve found my place!’

On how she’s feeling being at home and not being at school, Princess said: ‘It’s nice being at home, but school’s probably better for learning.’

And on keeping in touch with friends, she said: ‘I just text on my phone.’

Pete said: ‘She’s not allowed her phone in her room but it means she can only be on the phone when she’s downstairs and that’s why, when she’s here, her head’s facing down the whole time. 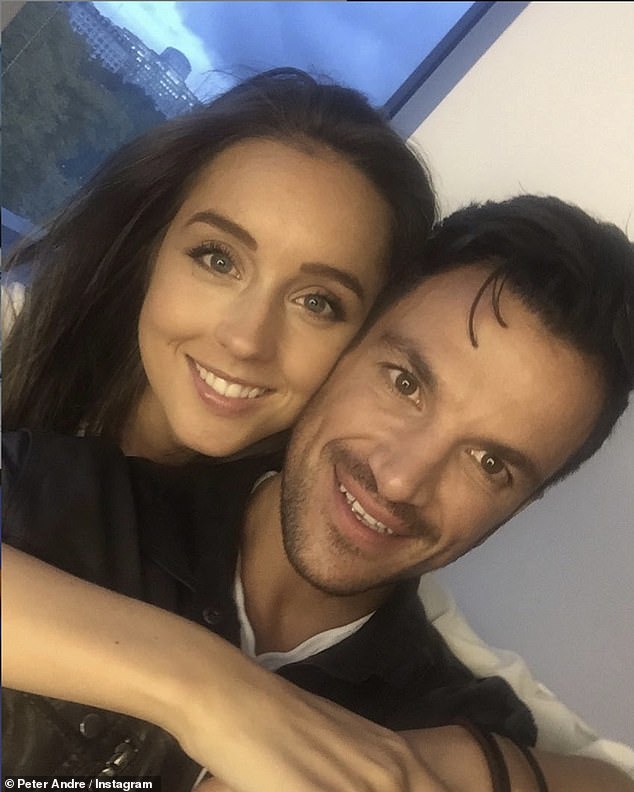 Proud: Peter took to Instagram on Monday to declares that he is ‘proud’ of his wife Emily and her colleagues as they continue to work in local NHS hospital amid coronavirus chaos

‘Personally I think it’s a bit harsh because the kids aren’t used to being at home and doing schoolwork at home, but I’m not a headmaster, I’m not a teacher, I’m only doing what I’m being told to do – they’ll get marked accordingly.’

On Monday, Pete praised Emily and her colleagues for working as she admitted knowing she’s at risk of catching coronavirus.

The former pop star shared a photograph of his wife and her medical workmates holding up signs urging people to stay at home, and thanked all NHS staff for the incredible work they’re doing.

He wrote: ‘Proud 🙂 Thank you so much to ALL the NHS and the carers up and down the country.’

Meanwhile, writing in her OK! magazine column, Emily detailed the reality of being a doctor at this scary time, noting her awareness of her increased risk of catching Covid-19.

She wrote: ‘At the time of writing this, myself, Pete and the kids are all fine. As a doctor, I am obviously continuing to work as normal unless any of us get any symptoms.

‘The chances are some us are probably going to get it, but we just have to be sensible and listen to the government’s advice.’

Grateful: Peter shared his thanks to the healthcare professions across the UK

While Emily continued her vital work at their local NHS hospital, Peter Andre turned school teacher for the day as he home-schooled his four children.

The Mysterious Girl hitmaker put down a huge polka dot picnic mat for his four children to begin their home-schooling with an arts and crafts day.

Princess pained a pretty rainbow alongside her brother Junior, 14, and their half-sister Amelia, 6, while little Theodore, 3, tried to climb on his box of toys. 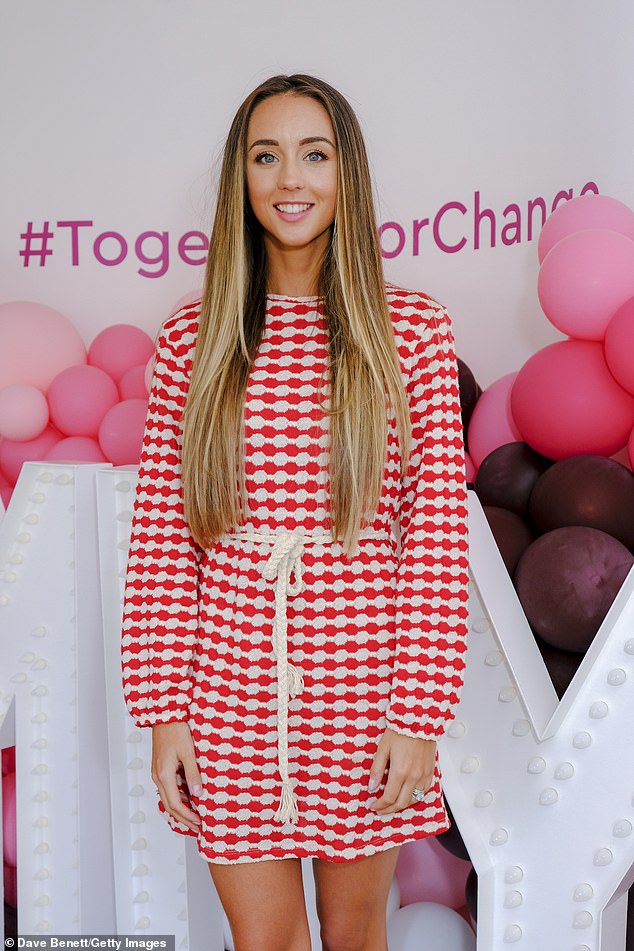 Scary! Emily detailed the reality of being a doctor at this scary time, noting her awareness of her increased risk of catching Covid-19 (Pictured in July 2019)

Peter’s post came just hours before prime minister Boris Johnson impost a nationwide lockdown in a bid to reduce the spread of coronavirus.

As of Monday, 335 people have died out of over 5,683 Covid-19 cases in the UK, and now people are not allowed to leave their homes – with a few exceptions.

Only essential work that cannot be done at home, exercise, and picking up food or medical supplies are valid reasons to go outside.

Weddings and social gatherings have been outlawed and all shops have been banned from opening except for those selling food and medicines.

Sporting events, music festival and other social gatherings have been either cancelled or postponed due to the crisis.