She recently revealed she’s more than five months pregnant with her first child with her millionaire beau Tony Keterman.

And former TOWIE star Lauren Pope, 37, told Vas J Morgan in a video shared on his new platform, @iamenoughuk that she’s been ‘freaking out’ as she faces a 12-week isolation period.

Around 1.5m Britons have been sent letters by the government telling them to not go outside for three months to protect from coronavirus. 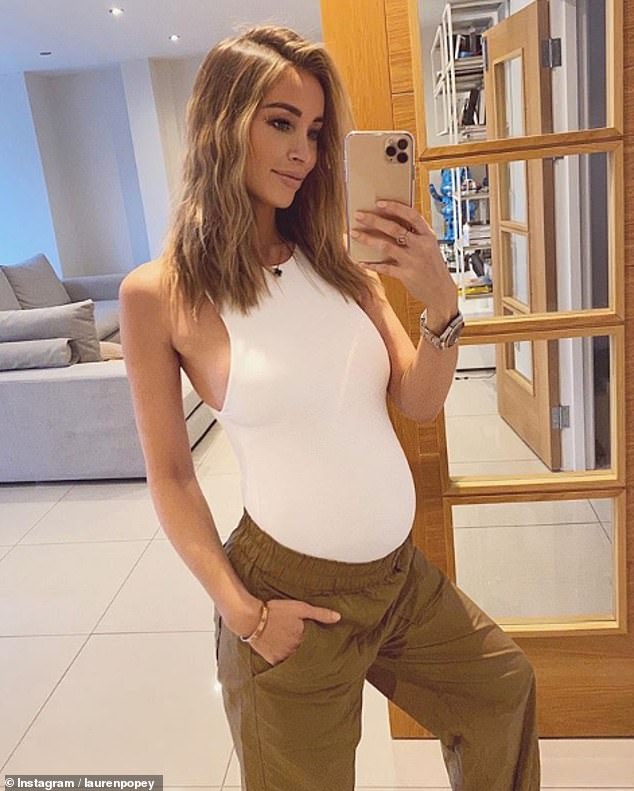 Scary time: Pregnant Lauren Pope, 37, told Vas J Morgan  in a new video that she has been ‘freaking out’ during her 12-week isolation period amid the coronavirus pandemic

Prime Minister Boris Johnson personally addressed letters to those most at risk from Covid-19, including over-70s, pregnant women and people with others with underlying health conditions.

During her discussion with Vas on mental health, Lauren said that while she feels thrilled to be pregnant, she naturally feels concerned about the lockdown and admitted she has faced negative comments from people.

She said: ‘I’ve been in isolation since last Saturday, I’ve been keeping as busy as possible. 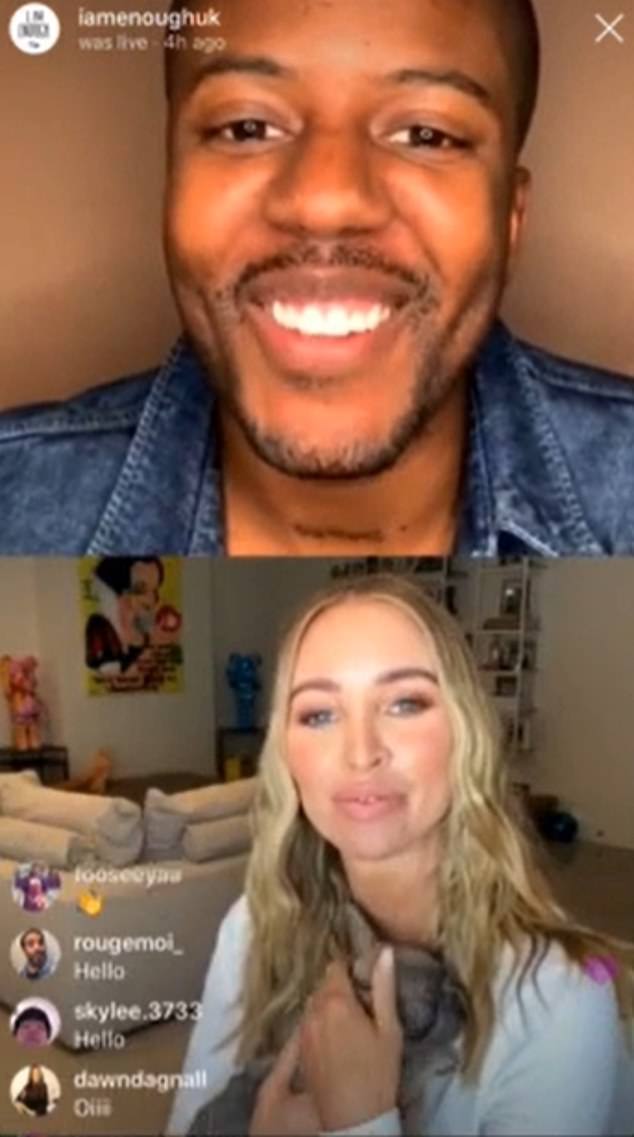 ‘I’m used to it by now’: The former TOWIE co-stars discussed how she was finding the experience and she said she has faced criticism from other people during her lockdown

‘Ever since I found out I was pregnant my DMs have gone a bit crazy with women who are only on the 12 week isolation.

‘I think all pregnant women freaked out a little bit, myself included, not knowing what we’d do for 12 weeks.

‘I’ve had loads of women DMing and wanted to link them all together, so together I’ve set up a Facebook group called The Mum’s Space in the hope that we can use it to chat. I think talking really helps.’ 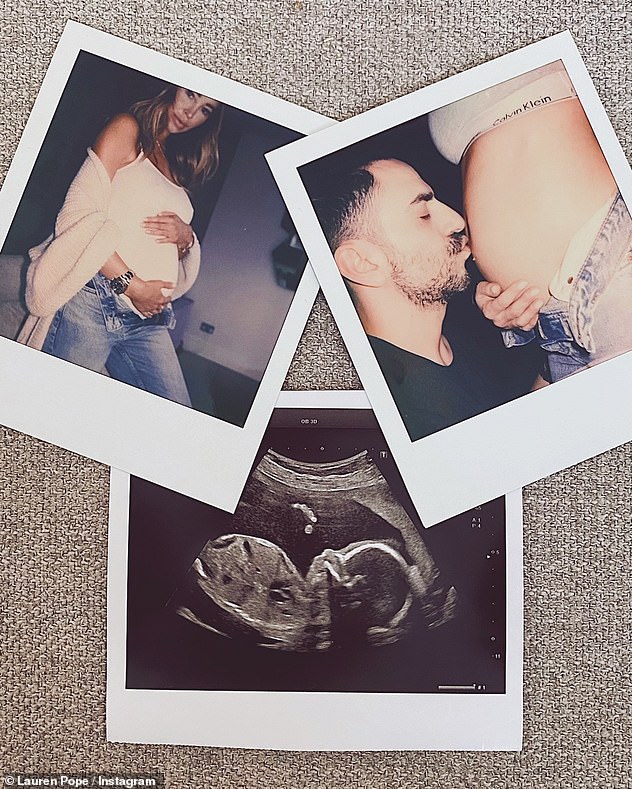 Stay safe, stay home: People including over-70s, pregnant women and people with others with underlying health conditions have been advised to self-isolate for three months (Lauren revealed she was five months pregnant earlier this month)

Lauren said she’s trying not to focus on the 12 week time frame and hopes there will be a development which means it won’t be that long, but admits she could be in denial.

She said: ‘I just haven’t been out, I keep meaning to go for a walk. It’s been OK so far. I think next week I’ll have a sudden whack in the face of “argh what’s going on!”‘

Lauren has battled with morning sickness, saying: ‘I was sick from week six until 13/14 weeks in. 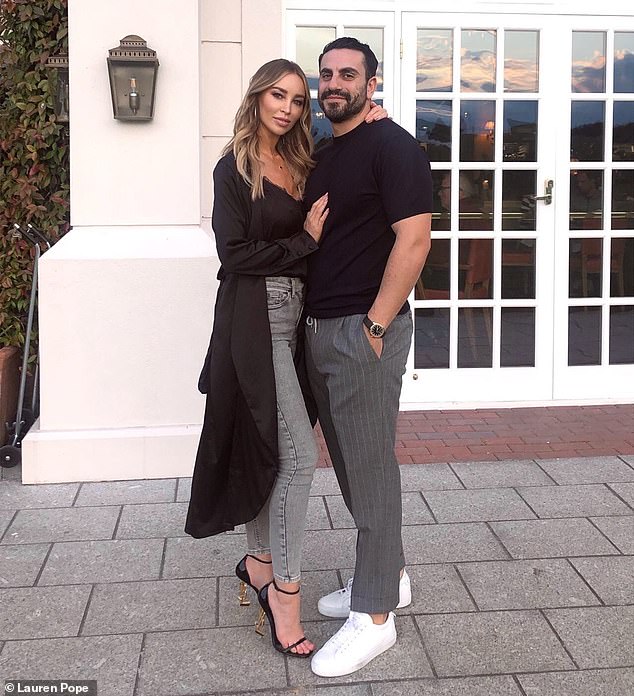 Mr. Right: Lauren is expecting her first child with millionaire beau Tony Keterman, 33, who is a foreign exchange investor

‘I lived off beige food, dry pasta and crackers and ginger biscuit. It’s quite miserable.

‘Every time you’re sick you have to remind yourself that you’re lucky that you’re pregnant.

I think when you’re pregnant you get [criticised by others]. I posted a picture of my lunch the other day and people are like “why are you eating eggs?”‘

‘And you question yourself and I Googled it, then reposted that Google said that eggs are okay to eat. 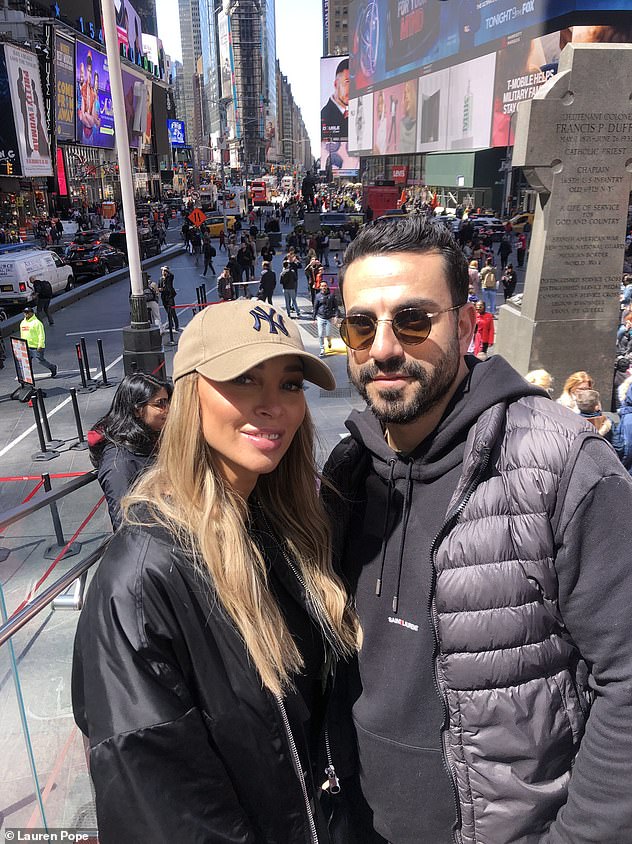 Her love: Lauren bowed out of the spotlight in March last year to spend time with her boyfriend following a nine year stint on TOWIE

‘I do start thinking like what am I doing wrong, but because we’ve been on a TV show before.

‘Once you’ve heard an insult once or twice it goes in one ear and out the other. All of us get our own insults, people used to say I blink too much.

‘It’s like really? Is that really bothering you that much how much I blink? It’s nothing new so it doesn’t affect me.’

Lauren previously said on Instagram that she is so glad she waited for the right man to come into her life before starting a family and foreign exchange investor Tony, 33, is just that. 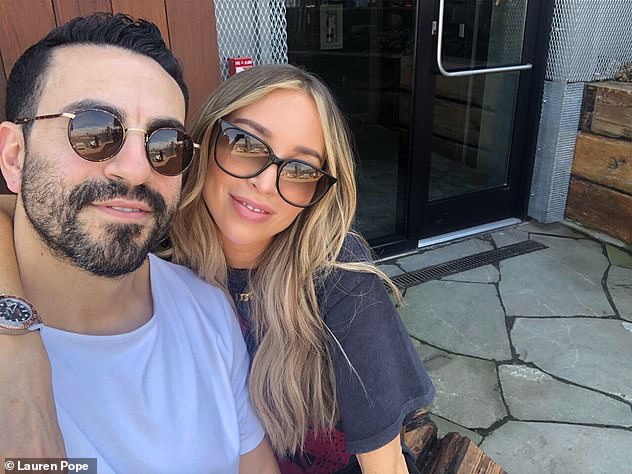 A source told MailOnline: ’Lauren consciously took a step away from the limelight some time ago now. Since then, she has been fully focused on her business and is truly head over heels with her boyfriend’

She said: ‘In the back of my mind I knew I always wanted a family of my own but I was just more concerned about waiting & doing that with the right person & not rushing it.’

‘I’m just so glad I did wait for that person & never settled for anything less [than] I felt I deserved,’ she added, before telling another fan of her baby’s impending arrival: ‘I’ve never been more excited about anything in my life.’

Writing to another of her followers, the erstwhile reality star wrote: ‘I’m 37 & the happiest & most content I’ve ever been on so many levels. Hopefully anyone out there trying to conceive at a similar age to me will see some comfort in my journey.

‘I [used] to stupidly think I would be considered old to get pregnant but the fertility experts I’ve spoken to have all told me that’s really not true. Just in case anyone needs to hear this right now.’ 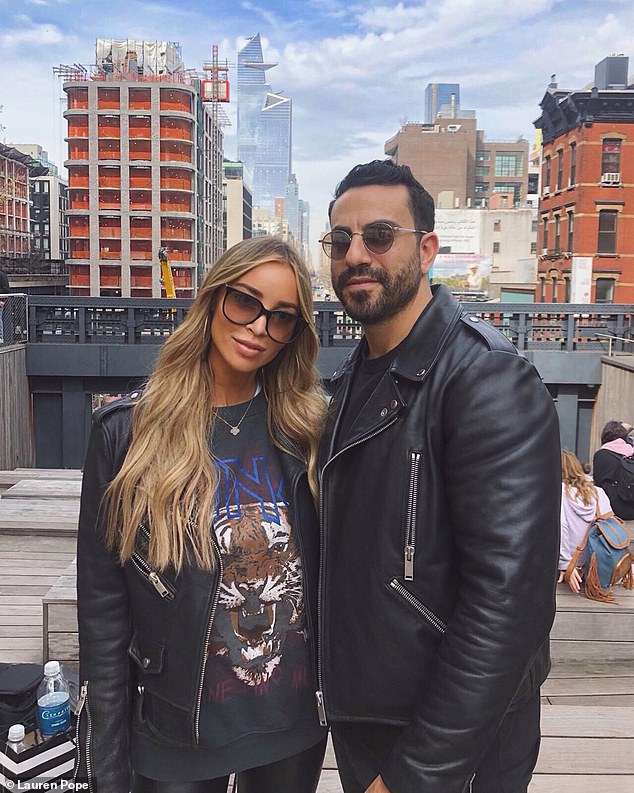 Cautious: ‘Lauren wanted to wait until she was way past the three month mark before revealing her news to make sure the baby was safe and healthy’